A downloadable game for Windows and macOS

"Yeah they got guns and such. But they don't have the BALLS!"

Purple ball guy is a 2D platformer that combines puzzle solving and battling together.  With a magic purple ball and a knife, the player needs to slain all the armed enemy ahead, finding the way out of all five levels.

A/D to move, Spacebar to jump, W/S to climb ladders;

E to toggle / escape from vent.

Purple Ball Guy looks like it's on the path to be a completed game! It looks very polished from the clear sound effects and playful art style. Like I mentioned in class prior, the biggest suggestion I have would be to improve the tutorial section to make clear what the different UI elements mean for the player. Without explanation it was a bit of a guessing game for me on what I could do, and I realize I even missed out on some core features you guys included.Once it was all explained to me though, I was able to play easily and see the game has a good amount of balance.

Awesome game design and gameplay. I really enjoyed playing through it, as well as just taking in the smaller details, like the detection from enemies and the use of the ball. It was very unique and a fun experience. If I could give any kind of suggestion for the game at all it would be for the scoring, like heightening the amount for players and giving more for being able to get past the enemies without getting caught by all of them could yield extra.

Nicely done, having the tutorial also be the intro screen is very clever. I think your levels are very well designed. The level-progression is paced well. I didn't find any huge difficult jumps. The last level was especially challenging. I played the game multiple times to try and get a flawless, zero death run.

This was a really well done platformer. I had a lot of fun trying to be as stealthy as possible. I've also never really seen the platform genre focus on this kind of gameplay, either.

Such an interesting and polished pixel action game. Instantly from the delicacy of the sprites of the game, one would be able to tell the degree of completion of this game. Likewise, the mechanism of this game is intriguing and challenging, which complements the theme and the style of the game perfectly. The controls and its accompanying animations are very smooth and intuitive. One recommendation would be that make some improvements on the free practice range for effective tutorials.

This game is very well done and could easily be ready to be played as a mobile app. The enemy AI is well executed and the ability for enemies to use ladders is a nice touch! I think the difficulty is a bit high for the end level but I think that this could add to the game's replay-ability. There were issues with the UI but it seems that it will be addressed. I think the game could benefit from a change in the ways that each level looked, using different environment assets could indicate a change in difficulty and add to the narrative.

In two weeks time, you guys managed to pull off a super polished game that has a lot of depth to its gameplay, that is very impressive! The game has a nice difficulty curve, though perhaps only the most dedicated player base can get through the later levels without ever being caught. The way things are right now, there is not much of an incentive for me to stealth the levels, but I saw you were implementing a star rating system which I think will definitely help. When playing on your own, it hard to know what 'good' or 'bad' score is, so I went through the game without much care if I get detected or not. While I played in this aggro style, I found that I could exploit the ladders, because that is the only state the enemies cannot shoot, so I lured them all to a ladder and took them out while I could not be hurt. I already see that the UI issue has already been talked about a bunch, so I will leave that alone. I look forward to the next update!

The variance in levels; I feel like you could have had a decent game with just the magician and enemies in a default layout, but there’s so much more to it; ladder mechanics, dark levels and sound, vision cones, switches, even tunnels. There’s enough variety that this is actually really fun.

This is super minor, but it’s partially because it’s so minor that I’m bringing it up: an icon! For the level of polish the rest of the game has, the lack of one was really striking. I feel like it makes the game just feel so much more finished; I think you should try to prioritize putting in an icon (even a placeholder) relatively early, just so you’re not left without one at the end.

I think the other big thing is that the knife is too strong / the purple ball is too weak. It gets a bit harder on the dark level, but in the beginning there’s not really a reason to use the ball--you can just run around slicing everyone up. I think the restriction on where you can throw the ball really hurts it--you have to be on the ground (I think?), and can only throw it straight left/right. Maybe just letting you throw it in any direction, or having it bounce and hit multiple enemies (but a longer cooldown?) might give it more utility.

On the dark level, I hit esc to give write some notes for the feedback and accidentally closed the game.

What was confusing or intuitive about the interface or controls?

This was brought up when you guys demoed it in class, but I think the UI for the ability cooldown looks too much like buttons--when I played this the first time, I kept trying to click on those to activate the abilities.

Beyond that, I think it works well. I like how accessible you guys made ladders, it all feels really smooth to control.

What was confusing or intuitive about the game mechanics?

I was confused about whether to press the “buttons” on the UI rather than just use the mouse for the attacks at first, but otherwise I feel like it all works really well.

What was frustrating or imaginative about the visual art, or sound design?

The song is a little bit repetitive after a while, but it’s not too bad really.

I liked the footsteps, and how they varied in sound. The animations and sprites were also all really nice and clear, it made it really painless to navigate and look around the levels.

I love how much you guys managed to pull off, especially in only a couple of weeks! This is a really cool game.

Thank you for the feedback Xander! Glad you enjoyed the game. The big UI cooldown "button" is because that we misjudged the screen resolution in the unity editor, and we def will fix that in the next update. We will also do a pause menu for the Escape key.

I think that Purple Ball Guy is really a blast to play! I think that having the opening screen be a tutorial level/a way to experiment with the mechanics of the game before even playing is a really neat way to introduce the players to the concepts of the game, even before you officially enter the game itself. I found myself trying to play no-kill runs of the level- though, inevitably, it was very difficult, as they always found me in the end. However, I think that’s a really great way to structure a game- having multiple ways to allow the player to win, or at least having that space to allow the player to experiment is really awesome. Good job!

Thank you Yuen! No kill runs are very difficult, and might be impossible in Level 5. In the update version we are making a better scoring system, encouraging the player to do kills, but before when they'are found out by anyone.

- I want to applaud you guys for making a polished game in 3 week! The stealth mechanics are really amazing to see. I like overall level designs.

- I personally think the score system is not necessary in this game. I was able to pass the stages even though I didn’t kill any of the enemies. I thought it would be nice if each stage had the minimum number of enemies to kill. If I get the score every time I kill an enemy, I can easily guess what the highest score will be.

- I was surprised when I didn't see any enemies at first in the fourth stage but it was amazing.

What was confusing or intuitive about the interface or controls?

- There was a little lack of explanation on how to attack. I didn't know at first that I could right-click.

What was frustrating or imaginative about the visual art, or sound design?

- The music really fits well with the game concept. Pixels expressed everything they needed really simply.

- I hope the door(vent?) can be seen on one screen in the third stage. It was difficult to use strategically because the door was not visible at once and I had to take a risk.

Thanks Chang! What you said about the scoring system is absolutely right. In the upcoming update plans of the game (not coming out yet), we decide to replace the score with stars:

Hope that would give a better evaluation for the players' performance. And yes, we will definitely add a more through tutorial!

I think you guys managed to create a really great experience here! The art and game mechanics work together seamlessly to make this game feel very polished and well thought through. As I mentioned in class I really appreciate how you introduced actions to players and really like your idea about having a practice dummy in the first scene. I think you should play around with making it more obvious that the dummy is interactive or make a more obvious route to jump up to that platform. I also agree with what was said in class about scaling down the two attack UI so that they feel less like something players should click.  Seriously impressive overall!

Thanks Chloe! When Alex was making the game it was in a different resolution, so the buttons seems to be smaller. Was totally not expecting them to be this huge lol. The tutorial level is definitely going to be more thorough, and I'm thinking about replacing the dummy with a cleaning robot holding a sweeper, so the player knows it's harmless. 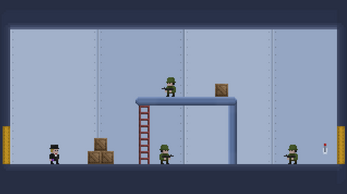 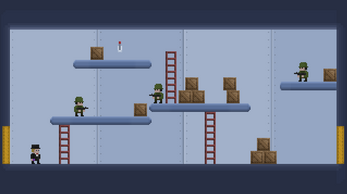 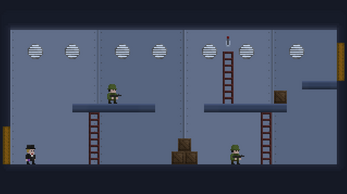 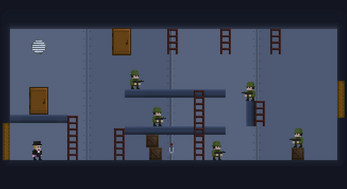