A downloadable game for Windows and macOS

"But Becky you're sick, and mom said we should stay home..."

Afternoon Walk is a 2.5D platformer with unique physics, inspired by QWOP and Getting Over it with Bennett Foddy.

Sam's little sister Becky is sick, but she wants to breathe some fresh air today, outside in the woods. So, in a breezy afternoon, the two kids and their dog Poppy started their adventure.

The game can be played by 1-3 players.

Tip: Curling legs is suggested when landing from a big fall.

I was able to see this project during the initial prototyping stages, so it's awesome to see all the improvements that have been made.  It's similar to QWOP while not being an exact copy which is good. The 3D assets blend in well with the 2D, making the overall appearance seamless. The music and response menu screens are icing on the cake too!

You already have polished gameplay, UI, and title screens. I recommend adding a tutorial portion stating the game's controls as it's not obvious unless you were to be looking at the itch page.

This is a pretty fun game when it comes to playing with friends, as it's an overall competition between the people and the dog most of the time (even though that's not the point of the game.) It's interesting to play with the piggy back mechanic and how the gravity for them works.

From what I can tell, the dog perhaps, would be nice to add an interesting function to them aside from being able to push things, as all they do is go forward or jump. Perhaps a similar step mechanic? I'm not sure, but otherwise, pretty cool game.

Oddly fun game. I think you guys did a good job building on the concepts from QWOP. I think the game is a little difficult at first but eventually, I got the hang of it. There was one little "cheat method" that I kept using. If you just jump non-stop, you could travel some insane distances without really trying. I think maybe adding a cool down for the jump would mitigate this. I think the game is also entirely playable with one person. That was probably the reason why I discovered the jumping technique. Cool game.

This game has such an interesting and intriguing foundations and hook to the players. Speaking solely from its mechanism aspect, the objective and controls of the game are very well defined and coherent. Disintegrating an already complex organic mechanism into mechanical game controls are good choice. The balancing of the physics in the game is on point, as it is difficult enough for create obstacles, but effective enough to overcome the challenges of the game. The art style is very pleasant. However, in perspective of a multiplayer game, the control of the game seems to able to function a bit too independently for just one person.

Reply
Will1 year ago

The art style is great. I love making 2D sprites and then merging them into a 3D environment, and I think it's done very well in this game. The mechanics seem so complex, and I cannot wrap my head around on how this movement was created. I think the level design is really great. It smooths the players into harder obstacles and challenges to overcome. Having a dog to the overall progression of the game also adds that extra layer of depth to the game. I think what I love the most is the pairing between the boy and the girl, and having the girl as the main source of balance. I think it is a very creative way of creating that sense of balance. Also the 3D environment is very visually appealing. The clean shades sort of reminds me of the Untitled Goose game. But it is also able to maintain a unique look that is very different.

This game was super fun to play. I'm really glad I had the opportunity to playtest the first version and see how far it has come!

The first strength I noticed was the visual design. The 2.5D design is a really good choice for this game, and also a great decision for using the physics engine. I was really impressed with how the 2D assets were rigged like a ragdoll and also felt it was very QWOP-like-- which I enjoyed. Overall, beautiful 3D background art and 2D asset designs!

Another strength I enjoyed was that you added the little girl on the shoulders. I remember back in development, it was unsure if there would be a player atop the other, or other characters. I think this was a good choice and made gameplay interesting.

In terms of suggestions for improvement, I think this game is very polished already. I think my feedback would be aimed towards the development itself, as we spent a bit of time together playtesting and discussing this game.

As a playtester, it was uncomfortable when my feedback was talked over to debate decision-making. I would suggest keeping those conversations for after the playtest-- it will keep your playtesting sessions professional, and allow you to receive feedback.

Overall, I felt that this was a great iteration of this game. I'm so glad to see it come so far after only a couple of weeks! Great job and keep it up.

I never knew I needed to play a new and improved QWOP-like game. The graphics with the usage of toon shaders in combination with the 2D characters work really well. I know this is for a multiplayer project, but it feels as though a potential future development could be making this a single player game. The game is difficult as it is, and playing it as currently intended with multiple players seems even more impossible. I read the devlogs and I appreciate the revealed secrets of the scripting side of this! The hinge-based movement is certainly unique and immediately fun so this was a great concept with amazing execution! Nicely done!

Thanks Ethan! We do like the idea of "doing weird tasks with friends and blaming each other" very much. But to be fair, a local multiplayer game should better have a single player mood on the side too. We will change the mechanic of player 3, and see if we can make it better for single-player playthroughs.

This game is very well done and polished! The mechanics are well thought out and add to the narrative of the story. The art and style of the game is very beautiful and the shading looks great! I did find it to be difficult, however I can see how it would be easier for players to replay once they have beaten it. I think you could easily fix this by messing with the length of levels or more levels. The multiplayer concept is strong and I think the addition of the dog is effective and goes well with the narrative. Overall this game is strong in its gameplay and aesthetics.

Thanks Ava! We will make the gaps smaller in the update for sure.

Afternoon Walk is a lovely game. I had the pleasure of playing the prototype, and I can see that you all have made wonderful progress thus far! I really appreciate the visuals of it all- the cell shaded aesthetic is really quite refreshing, and it goes with the charming feel of the game. However, in contrast to the the visuals, the difficulty level of the game seems to be quite fiendish. However, I think that you guys actually incremented the difficulty quite well, as I could see from the map when you were first presenting. But, I would still recommend introducing smaller, lower risk obstacles in the beginning, so the player could better “train” themselves for future hurdles. But overall, great job!

Yes. It turns out that making a QWOP level of difficulty might work in long terms, but not in a 30-min presentation. Even I could not get through all the obstacles -- I have to use hacks in the unity editor to get though each of them individually, and that's also how we made sure it's "technically winnable" haha.

We will definitely lower the overall difficulty, and add checkpoints to the game for the player to respawn. Thanks for your feed back!!!

My favorite moment is when I succeed in a jump, specifically the second section. Sometimes when I jump, I blow a girl up and I don't know why this happens, but it was a fun moment.

I wish I could see the tutorial in-game.

I thought it would be nice if the dog was always visible on the screen, too. Now the camera seems to be only following a man.

I stopped at the second jump section at first because I didn't know if I could move the stone.

Was there anything related to the mechanics that was hard to understand?

Was there anything related to the art, or sound that was hard to understand?

I love the overall atmosphere with a calm, and charming feeling. Art and sounds are well matched to the mood of the game. If the fast and dynamic sounds were inserted into the game, I would have been more stressed when the game was over. I think it is a great idea that filled pink color to the stone which is moveable.

The movement from walking to jumping is really well subdivided, and it seems to be challenging enough which is math to the game concept.

I wish the environment(map) was designed so that I could try again from the point where I made a mistake, like the game Getting Over it with Bennett Foddy, rather than designing a map that falls into the water, and restart the game.

Thanks for your feedback Chang! Glad you like our art. All models are done by Alex, and all sprites are done by Chloe.

The tutorials, dog animations, sound design and the overall difficulty are all on our future dev schedule. We planned to make check points so the player can respawn there after they died, but we had no time and had to prioritize the physics. 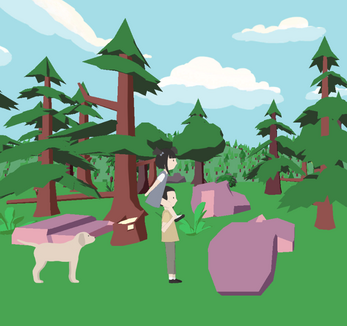 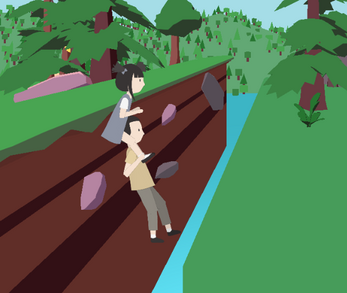 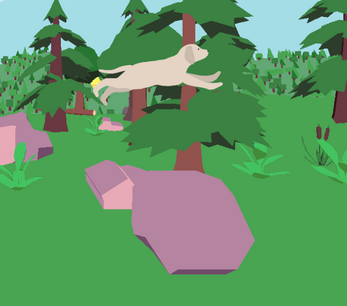 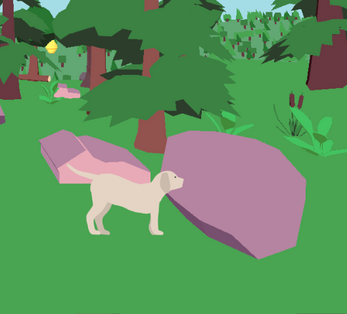